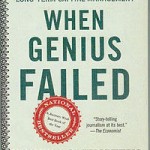 I have just finished reading When Genius Failed by Roger Lowenstein. The book is an unauthorized biography of the rise and fall of Long-Term Capital Management (LTCM). For those who is not aware of this incredible story, here is a brief recap:

LTCM was formed by trading and intellectual “geniuses”, both from the investment banks and academia. It was founded in 1993 and hailed as the most impressive hedge fund in history (before the collapse). In early 1998 it had four years with impressive results and the that was even more impressing considering the enormous capital under management. Led by the notoriously successful bond arbitrageur John Meriwether, the firm boasted a partnership that included two Nobel Price winning economists (Scholes and Merton) and a cadre of Wall Street’s and academia’s elite traders. After four years the  juggernaut experienced and incredible good performance, but “suddenly” experienced catastrophic losses that jeopardised not only the biggest banks but the stability of the financial systems itself.

By the end of 1997 the fund had about $4 billion in equity and a staggering $150 billion in assets. Put shortly, the leverage was enormous. The fund traded many different strategies and markets and correlation was expected to be negative or very low among the strategies. One dollar invested in 1993 was at the peak in early 1998 worth 4 (quadropled). Quite an astonoshing performance. However, all this performance was due to leverage. According to the author the return without gearing was a tiny annual 2.45% from 1993 until end of 1995.

The “geniuses” in LTCM had calculated that the maximum loss on any single day would not exceed $35 million. In the turmoil of the bond default in Russia summer of 1998 the fund lost a staggering $553 million in just one day. So much for calculating the risk…

One of the lessons learned: long-term thinking is a luxury not always available to the highly leveraged; they may not survive that long. When Russia defaulted, LTCM was suddenly in almost unchartered territory. Theoretically, the odds against a loss such as August’s 1998 had been prohibitive. Such a debacle was, according to the mathematicians, an event so freakish as to be unlikely to occur even once over the entire life of the universe. But it still happened. The fat tails in the financial markets happen a lot more than normal distribution suggest. They had forgotten that traders and investors are not rational, but people moved by greed and fear, capable of extreme behaviour and swings of mood so often observed in crowds. Needless to say, the diversification did not work. In a crisis, all strategies become correlated (this also happened in the meltdown in 2008). When Russia defaulted credit spreads increased dramatically and liquidity dried up. LTCM could not get out of its positions. Even worse, the so-called uncorrelated strategies suddenly became very correlated, on the downside (of course). Swaps, credit spreads, bonds and equity all became very correlated. How could the Nobel prize winners have overlooked this possibility? It’s certainly not the first time it has happened.

The book describes in detail how the fund collapsed. It’s a good read, but it really lacks comments from the partners involved. None of the main persons behind LTCM has ever said anything publicly, and this makes the book a lot less interesting.

One of my favourite books, Fooled by Randomness, covers exactly what went wrong with LTCM: you have to prepare for freak behaviour in the markets.

In my opinion, the fund didn’t have any superior strategies. One of the strategies, merger arbitrage, was carried out so simply I can hardly believe Nobel Prize winners had anything to do with it. I have always been sceptical about the “geniuses” behind stellar performance. I think luck is a far bigger contributor than skill. With the leverage in LTCM it was just an accident waiting to happen.

One Response to When Genius Failed – Roger Lowenstein