Last Updated on May 21, 2022 by Quantified Trading

Before we go on to explain what a Fibonacci moving average is and how you can calculate it, we go straight to the essence of what this website is all about: quantified backtests.

Our hypothesis is simple:

We look at the most traded instrument in the world: the S&P 500. We test on SPDR S&P 500 Trust ETF which has the ticker code SPY.

All in all, we do four different backtests:

The results of the first two strategies look like this:

Compared to most of the other moving averages, the Fibonacci moving average works best when you sell on strength and sell on weakness. However, the annual return of the crossover systems in strategies 1 and 2 are not impressive and not tradeable, in our opinion.

The results from backtests 3 and 4 looks like this (the results are not CAGR, but average gains per trade):

As expected, the longer you are in the stock market, the better returns you get. This is because of the tailwind in the form of inflation and productivity gains. The returns by holding for 200 days after a signal is competitive compared to buy and hold.

What is the Fibonacci moving average?

The choice of the ‘high’ and ‘low’ price data, instead of the ‘close’ price data, is because they are considered price rejection levels and, as such, can present more important support and resistance levels in the moving average indicator. The Fibonacci moving average tends to give a better view of the market, whether long term or short term, and it is very useful in spotting potential support and resistance zones. It is a powerful indicator that takes into account many underlying moving averages to give out an approximate short-term/long-term view of the markets.

How to calculate a Fibonacci moving average

The Fibonacci sequence is as follows;

This number is obtained by adding the two previous numbers. For example, 55 is gotten by adding 34 + 21. Thus, the formula for the Fibonacci sequence is given as:

Why use the Fibonacci moving average?

The Fibonacci moving average makes use of the Fibonacci sequence as its input, and this sequence has been known to identify potential areas of value on the price chart.

In addition to identifying key support and resistance areas on the chart, the indicator can help you to spot trends and reversals. It can also add strength to your oscillators since you know that the Fibonacci sequence acts as an area of value. For example, an oversold reading on your oscillator coupled with a pullback of price to the trend could be a confirmation that a reversal is likely.

How to use the Fibonacci moving average

However, if it is not available on your trading platform, you can pay someone to code it for you. Alternatively, you can manipulate an EMA to get a Fibonacci-based moving average by doing this:

Note that this does not give you the actual Fibonacci moving average developed by Sofien Kaabar, CFA.

How can you use the Fibonacci moving average?

You can use the Fibonacci moving average in different ways. Let’s see a few examples.

As a single indicator, the Fibonacci moving average can be used to identify the trend and then trade pullback reversals from its support and resistance levels. 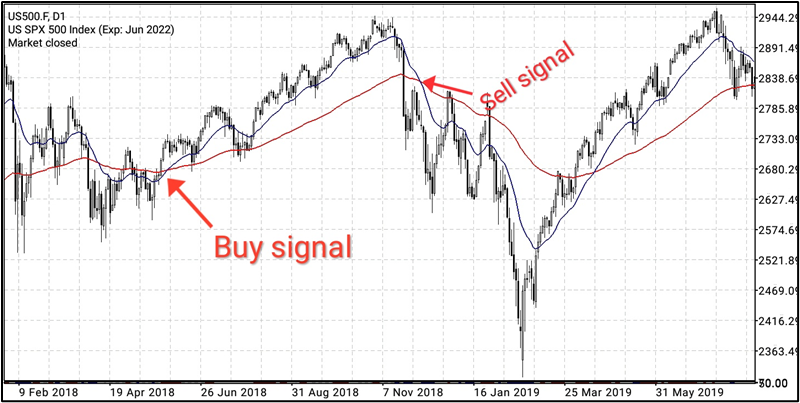 Just as you do with the crossover strategy, it works well in a trending market. Adding more confirmation will increase the probability of your trades.

As with most moving averages, the Fibonacci moving average also manifests the lag factor because it uses past price data. In addition, it could also give false signals when the market is range-bound.

Moving averages have been around in the trading markets for a long time. Most likely, moving average strategies were the start of the systematic and automated trading strategies developed in the 1970s, for example by Ed Seykota. We believe it’s safe to assume moving averages were a much better trading indicator before the 1990s due to the rise of the personal computer. The most low-hanging fruit has been “arbed away”.

That said, our backtests clearly show that you can develop profitable trading strategies based on moving averages but mainly based on short-term mean-reversion and longer trend-following. Furthermore, there exist many different moving averages and you can use a moving average differently/creatively, or you can combine moving averages with other parameters.

For your convenience, we have covered all moving averages with both detailed descriptions and backtests. This is our list:

Last Updated on May 25, 2022 by Oddmund Groette Trend following the S&P 500 is probably not the sexiest thing to do. Back in 2012 Meb Faber published a paper called A Quantitative Approach To Tactical Asset Allocation in the Journal of Wealth Management. Meb Faber found the 200-day moving average useful and decided to…

Last Updated on May 21, 2022 by Quantified Trading Hull moving average strategy backtest Experienced traders know that the best trading indicators are those that can reduce lag, eliminate noise, and quickly respond to sustained market changes. The Hull Moving Average (HMA) seems to tick those boxes. What do you know about the indicator? Is…

Last Updated on May 21, 2022 by Quantified Trading Triangular moving average strategy backtest Moving averages are the most common and useful technical indicators in forex trading, owing to their effect in smoothening out price movements and showing the actual direction of the trend. There are various types of moving averages. Apart from the common…

Last Updated on May 21, 2022 by Quantified Trading Bond trading strategies are difficult to find. Bonds are susceptible to erratic macro numbers and we believe bonds are harder to trade than stocks. Can the Japanese stock market predict the trend in US Treasury bonds? In this article, we look at how the Japanese stock…