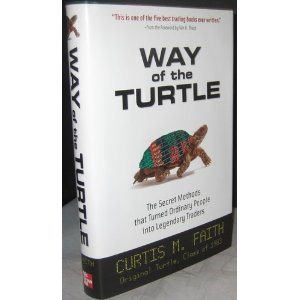 I have just finished reading Curtis Faith’s The Way of The Turtle (for the second time) and below you find some very short comments about the book. This is a very good book! If you’re a beginner or not very experienced this would be one of the 5 trading books I would recommend. I will keep this review and summary short and instead include some quotes from the book.

Put short, I recommend this book because of one thing: Faith describes in an easy way the importance of keeping things simple. Trading is actually not that difficult. The difficulty is in following your strategy/methodology. Simple trading systems can give you a tradeable edge, but it’s psychologically difficult for traders to follow even simple rules.

Faith illustrates this by giving examples. The most notable example is the Turtle experiment in which all traders were given the exact same trading system. Yet, some failed miserably while others prospered. Hence, Faith argues for the necessity to have mechanical systems. Mechanical trading eliminates emotions from trading.

The book is mainly about trend-following. However, you don’t need to be a dedicated trend follower to learn from this book. The principles are mainly the same (however, one might argue mean reversion is different, but that’s another topic). If you are new to trading, I strongly recommend this as your first book to read. If you’re a successful “veteran” (I dislike this word) it might not be so valuable.

Faith describes psychology with trading examples, what to look for when testing systems and he also backtests some of the systems he traded decades ago. They still seem to work! However, trend-following is not for the faint-hearted, so there is no free lunch.

Mr. Faith was (and is?) a trend follower. Just to give you a better grasp of what trend following is all about we recommend these links:

Some quotes from The Way Of The Turtle:

I like to collect quotes from books I read, and here you have some good quotes from the book:

Faith ends the book by writing this which I totally agree to:

“Remember what Richard Dennis said: “I always say that you could publish my trading rules in the newspaper and no one would follow them. The key is consistency and discipline. Almost anybody can make up a list of rules that are 80% as good as what we taught our people. What they couldn’t do is give them the confidence to stick to those rules even when things are going bad”. Perhaps the best evidence that this is true is the performance of the Turtles: Many of them did not make money. This was the case not because the rules did not work; it happened because they could not and did not follow the rules. The Turtle rules are very difficult to follow because they depend on capturing relatively infrequent large trends. As a result, many months can pass between winning periods, at times even a year or two. During those periods it is easy to come up with reasons to doubt the system and to stop following the rules: What if the rules don’t work anymore? What if the markets have changed? What if there is something important missing from the rules? How can I be sure this really works?….Another problem is the tendency to want to change the rules. Many of the Turtles, in an effort to reduce the risk of trading the system, changed the rules in subtle ways that sometimes had the opposite of the desired effect.”

Take a look at our Trading Strategies