Since the emergence of the internet, algorithmic trading has come to dominate the financial trading world, but what percentage of trading is actually algorithmic?

What is algorithmic trading?

Algorithmic trading is a method of trading the financial markets using pre-programmed algorithms to monitor the markets and execute trades. Algorithmic trading facilitates automated trading across all asset classes and market segments. This happens with zero direct human intervention, as the trades are executed based on pre-written instructions.

Here’s how it works: A trader loads his server with trading algos with specific instructions. The algos monitor the markets, searching for qualifying trade setups, and once they encounter the right setups, they execute the trades and manage them in accordance with the coded instructions.

So, from spotting the trade setups to executing and managing the trades, the entire process is automated. The idea of creating computer programs to trade one’s trading strategies is not just fascinating but has also become the ideal trading approach in recent times.

What percentage of trading is algorithmic?

In the UK and EU, only about a third of all stock trades in 2006 were driven by computer trading algorithms, but by 2009, algorithmic trading accounted for 60-73 percent of all equity trading volume, according to study reports. For instance, in 2006, about 40 percent of all orders were entered by algorithmic traders at the London Stock Exchange, and the number was expected to be 60 percent by 2007.

Generally, American markets and European markets tend to have a higher proportion of algorithmic trades than other markets, and the estimate for 2012 was as high as an 80 percent proportion in some markets.

In Asia, Japan has the highest level of algorithmic trading, which accounted for approximately 70-80 percent of all trading in 2019 in the FX spot market transacted on the EBS2 — one of the most commonly used electronic broking systems in the interbank market. In the equity market, more than 70 percent of orders on Tokyo’s stock exchange are now made by algorithmic traders.

However, the contribution of algo trading is much lower in emerging economies. For example, in India, the overall trading volume of algorithmic trading estimated is roughly 40 percent.

Presently, algorithmic trading is dominated by institutional traders and investors — traders who trade for a group or institution and buy and sell stocks on their behalf. These include pension funds, mutual fund families, insurance firms, and exchange-traded funds (ETFs).

Institutional investors use numerous computer-driven algorithmic strategies to execute and manage their orders. These techniques enable them to cut down the costs of trades and improve their profitability. Algorithmic trading is particularly helpful for high order sizes, which is why institutional investors and large brokerage firms largely make use of it to reduce trading expenses.

Institutional traders currently dominate the algo trading market, and they are expected to hold the major share for a long time. These traders not only trade huge sizes but also practice high-frequency trading. So, it is normal to use algorithmic trading to break the whole amount into small parts and continue to perform in specific time intervals or according to dedicated strategies.

For instance, if an institutional trader has to place an order for 1,00,000 shares, which can unduly affect the market, he can set up an algorithmic-trading instruction to execute 1,000 shares out every 15 seconds. This way, he gradually loads up orders in the market without unduly affecting the market prices.

Furthermore, algorithmic trading offers them the advantage to profit from value, which is based on millisecond arbitrage or little price movements. Algo trading also reduces the likelihood of human-caused errors and reacts to marketing conditions in a fraction of a second. 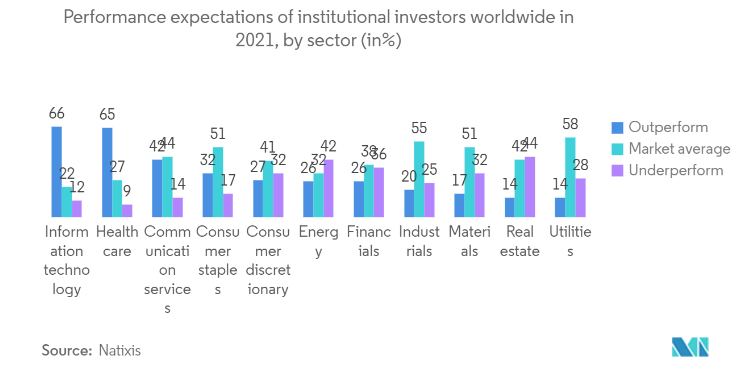 Apart from institutional traders, big retail, high-frequency traders use algorithmic trading to automate their trading process. It helps them to speed up the execution of trades, as they make many trades per day.

Algorithmic trading technology is not easy to afford, which is why it is mostly employed by institutional traders. But that trend is changing now as coding trading algorithms is becoming increasingly democratized. Trading platforms are making the coding languages easier, such that a retail trader can learn them and code their strategies themselves. Moreover, it is becoming easy to find freelance programmers that will code good algos for a few thousand bucks.

To get a full grasp of the algo trading market, we will discuss algorithmic trading stats under the following categories:

Algorithmic traders and investors use the method to trade most assets, including equities, foreign exchange, commodities, futures, options, and fixed income. But equities have the maximum share. Another market with a high volume of algo trading is the futures market. 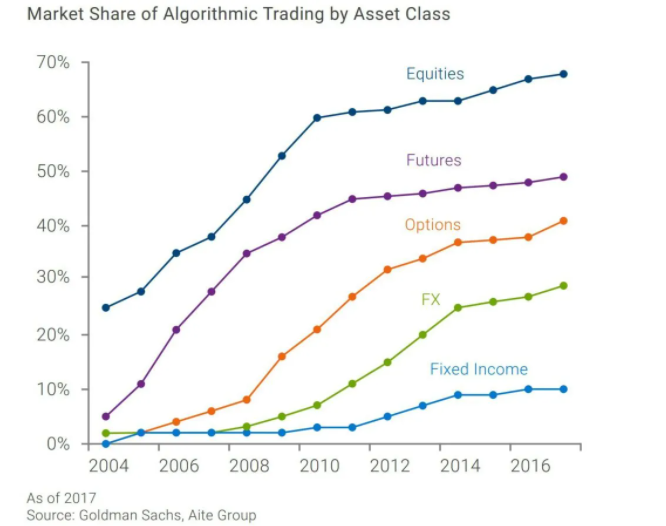 In 2021, nearly 92% of the multiple-listed options (equities & ETPs) were traded electronically, and 57.6% of the index options were electronically traded as of the time of the report.

The algorithmic trading volume in the stock market is growing at a CAGR of 11.23% between 2021 and2026, so it is projected that equities are likely to contribute $8.61 billion to the algo trading market share in 2027.

In 2018, algorithmic trading contributed nearly 60-73% of all U.S. equity trading. But less than 50% of trades for ticket sizes over $10 million were executed through algo trading in 2019. In Europe and the US, 10% of the hedge funds used algos to trade over 80% of their value in 2020, with the leading 12 investment banks earning about $2 billion from algo-managed portfolios, according to Coalition Greenwich.

In fact, about 52% of the institutional investors feel workflow efficiency is most instrumental in supporting best execution in algo trading. 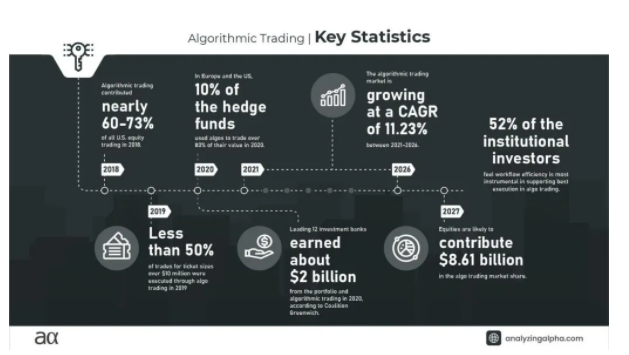 There is no doubt that the introduction of algorithmic trading in the foreign exchange market has improved its efficiency. Now, even retail traders are also widely using algo trading to trade the market. However, while algorithmic trading gives an edge to Forex traders in terms of speed and execution, it is still difficult to acquire and implement. As a result, only a handful of influential traders can acquire such sophisticated trading, leading to imbalances and liquidity issues.

Nonetheless, these are some of the key stats: About 92% of trading in the Forex market was performed by trading algorithms instead of humans, and over 70% of total spot FX turnover across the globe is executed electronically in 2019. Moreover, 46% of all institutional trading volume is now executed through either direct market access (DMA), intelligent order routing, or algorithmic trades. Institutional traders believe that an additional 15% of FX trading is likely to be done via algos over the next two years. 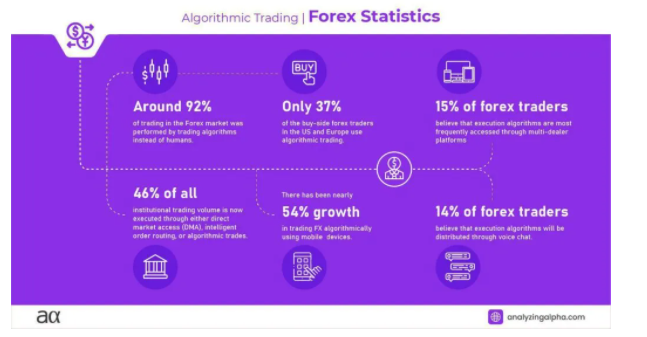 It’s been reported that hedge funds with massive assets under management are increasingly turning to algorithmic trading to handle their portfolio strategically. Apart from convenience and speed, algo trading helps hedge funds to reduce market volatility and gain price efficiency. It also makes for easy access to dark pools and alternative trading systems.

There was a 7% year-over-year increase in dark liquidity algo usage in 2020 in Europe and the US, and nearly a 6% year-over-year increase in the implementation shortfall (single stock) usage within the same period. The usage of the percentage of volume algo strategy fell 10.58%, while volume-weighted average price (VWAP) algo dropped 0.86% over the same period. however, the usage Time-weighted average price (TWAP) rose by nearly 13% from its 2019 score. 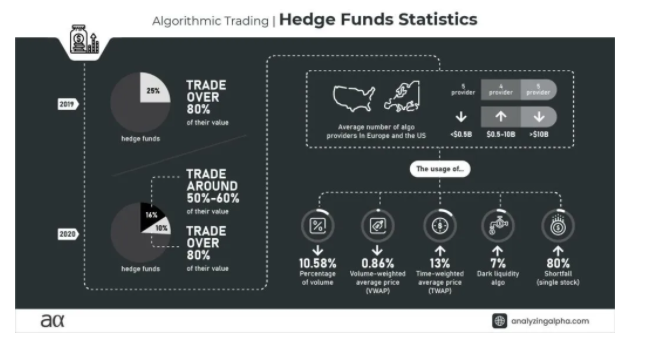 Given the rise in algorithmic trading, one can build a rewarding career trading with algorithms or creating trading algos. The work can be intellectually stimulating, and to succeed, one needs to possess a blended skillset that includes trading, programming, analytical, and mathematical skills, in addition to knowing how to develop trading strategies. 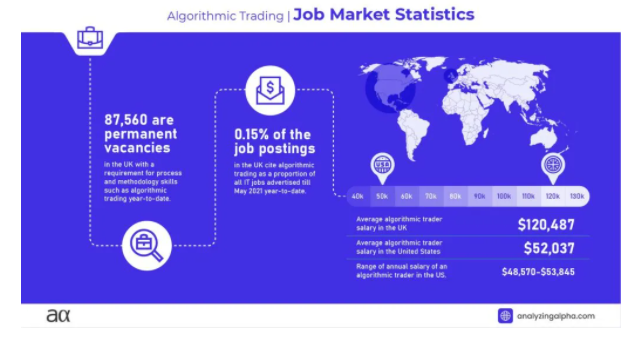 According to a report from Mordor Intelligence, North America is expected to hold the major market growth in the market studied. With the US financial markets being the largest and most liquid globally and algorithmic trading accounting for around 60-73% of the overall US equity trading, the forecast is by no means surprising.

Some of the major factors contributing to the market growth during the forecast period are rising investments in trading technologies (including blockchain), increasing presence of algorithmic trading vendors, and growing government support for global trading. With modern technologies rapidly changing the formats of traditional investment models, automating all related trading processes is essentially a way to create a safe and efficient ecosystem for every interested investor.

For example, a team of developers, in February 2022, launched a new ecosystem known as Dex Finance. Dex Finance created a low-risk algorithmic trading model that nearly anyone can use. It automates advanced trading strategies while incentivizing investors to leave their deposits within the protocol. Many of such platforms are also on their way.

In fact, the global algorithmic trading market is expected to grow from 11.1 billion in 2019 to 18.8 billion by 2024. This growth is likely to be driven by rising demand for quick, reliable, and effective order execution. Some of the factors that would fuel the growth in the algo trading market include lowered transactional costs, heightened government regulations, and increased demand for market surveillance.

Below is a chart showing the expected growth by regions between 2018 and 2024:

However, as algorithmic trading strategies, including high-frequency trading (HFT) strategies, have grown more widespread, the potential for these strategies to impact the market adversely and firm stability has likewise grown. So, it is important to manage risks aggressively, both at the individual traders’ level and at the exchange regulation level. This is why major exchanges introduced circuit breakers.

The key players in algorithmic trading

Many of these key players keep repositioning themselves to dominate their ecosystem through strategic acquisitions. For instance, in June 2021, IG Group acquired Tastytrade, a brokerage and investor education platform, in a deal worth $1 billion.

Similarly, in November 2021, Refinitiv and Pio-Tech announced the partnership to provide banking clients of both companies in the Middle East and African region with sophisticated contemporary solutions that offer many distinct business values. 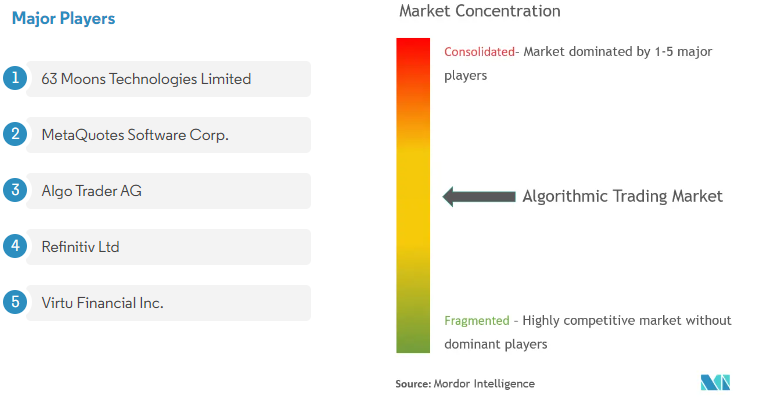 Many other moves are also in the pipeline. In February 2022, AlgoTrader raised $4.9 million in the Pre-Series B funding round to continue its digital asset growth strategy. This Pre-Series B funding was co-led by Credit Suisse Entrepreneur Capital and C3 EOS VC Fund with participation from East Asian venture capital firms Fenbushi Capital and SBI Investment.

What Percentage of Trading Is Algorithmic? Final words 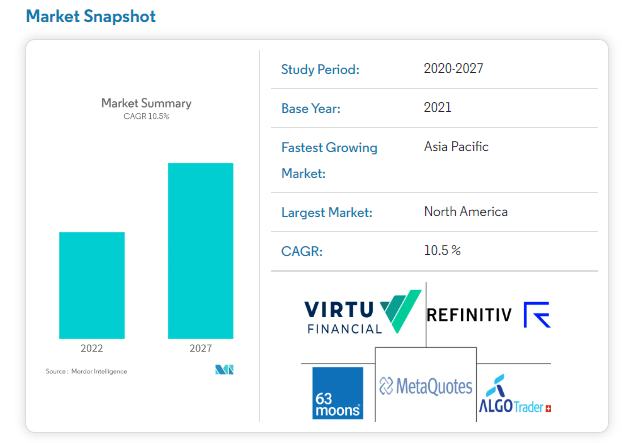 Last Updated on November 16, 2022 As a trader, you don’t want to do the hard work of monitoring the screen all the time and analyzing price movements looking for trade setups. This manual way of trading can be extremely hard and even prone to mistakes based on emotional and psychological biases. Moreover, there is…

Last Updated on October 23, 2022 Discretionary trading is becoming increasingly difficult and even unprofitable, as the markets have become more efficient. This is why smart traders now make use of data-driven strategies. But what are they? Data-driven strategies are essentially a method of trading that is based on data analysis and automated trading using…

Last Updated on January 10, 2023 Good data is important in trading. After ten years of day trading, I have experienced the expensive way the importance of good data. The famous saying “garbage in, garbage out” is indeed true. Your backtest is only as good as the data you are testing on. Make sure you…

Last Updated on August 30, 2022 You rarely manage to find trading strategies that perform better in live trading than in backtests. Why is it so? This is because of the disadvantages of backtesting. You need experience in backtesting to avoid the many pitfalls along the way. In this article, we look at the disadvantages…