As a trader or investor, you want to know the best ways to pick winning stocks, the most advantageous times to buy them, and the most effective risk management techniques to use. This is where the Wyckoff strategy comes in.

The Wyckoff strategy is a series of market classification, rules, and methodology developed by the legendary technical analyst, Richard Wyckoff, which investors can use to determine what stocks to buy and when to buy them. It consists of the Wyckoff market cycle, Wyckoff’s laws, and the Wyckoff Method.

To learn the Wyckoff approach to stock trading, read on!

What is the Wyckoff strategy?

In the early decades of the 20th century, Richard Wyckoff, a renowned market technician, wrote about financial markets, documenting his observations on price action. His pioneering approach to technical analysis survived into the modern era and is now known as the Wyckoff strategy.

The Wyckoff strategy is a series of market classification, rules, and methodology developed by the legendary technical analyst, Richard Wyckoff, which investors can use to determine what stocks to buy and when to buy them. His technical analysis approach has been distilled into the following elements:

The Wyckoff market cycle is the most popular element of the Wyckoff strategy. It’s based on Wyckoff’s observations of supply and demand. It explains how and why stocks and other securities move and the significance of price within the broad spectrum of uptrends, downtrends, and sideways markets. The price cycle shows that the market moves in a cyclical pattern of four distinct phases — accumulation, markup, distribution, and markdown. 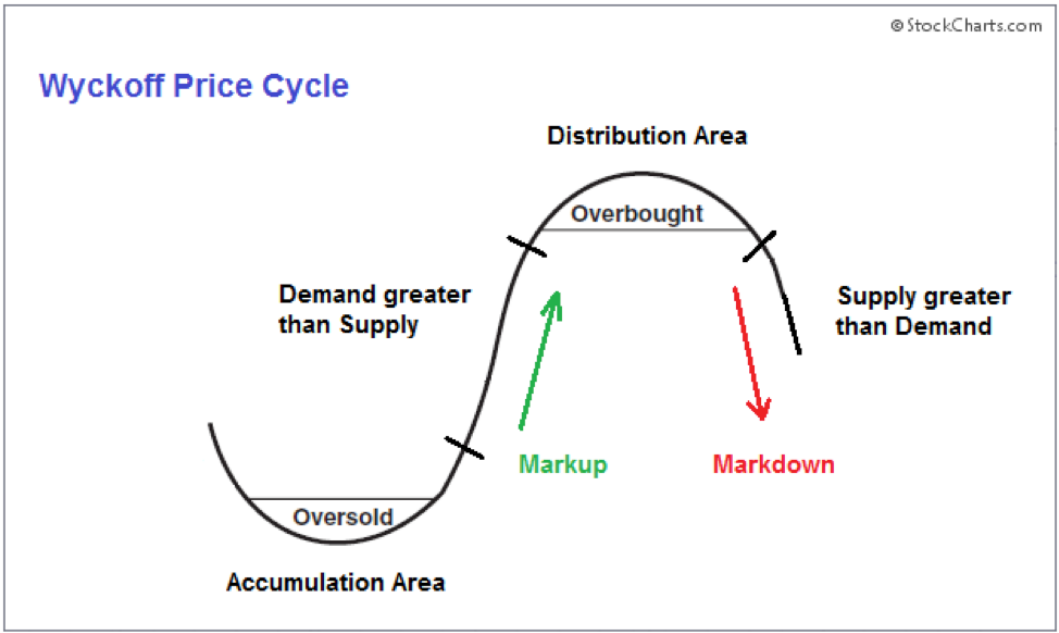 In essence, the phases represent the behavior of traders and can reveal the direction of a stock’s future price movement. Investors and traders use Wyckoff’s market cycle to identify a market’s direction, the likelihood of a reversal, and when large investors are accumulating and selling positions.

Here are the four phases in detail:

Wyckoff’s market cycle and his chart-based trading method are based on three fundamental “laws” that govern many aspects of his analysis, such as determining the market’s and individual stocks’ current and potential future directional bias, selecting the best stocks to trade long or short, identifying the readiness of a stock to leave a trading range and projecting price targets in a trend from a stock’s behavior in a trading range. Let’s take a look at each of those laws:

1. The law of supply and demand

This principle is central to Wyckoff’s method of trading and investing, as it determines the price direction — when demand is greater than supply, prices rise, and when supply is greater than demand, prices fall. You can study the balance between supply and demand by comparing price and volume bars over time. On the intraday timeframe, the volume-weighted average price (VWAP) comes in handy. While this law is deceptively simple, it takes time to learn how to accurately evaluate supply and demand on bar charts and use it to your advantage while trading.

2. The law of cause and effect

This law helps you to set price objectives by gauging the potential extent of a trend emerging from a trading range. The law manifests as the force of accumulation or distribution within a trading range and the subsequent trend or movement up or down. The Point and Figure chart counts are used to measure a cause and project the extent of its effect. You can measure Wyckoff’s “cause” with the horizontal point count in a Point and Figure chart. The “effect” is the distance price moves corresponding to the point count.

3. The law of effort versus result

This provides an early warning of a possible change in trend in the near future. When there is a divergence between volume and price, it could signal a change in the direction of the price trend. For example, when there are several sessions with huge volume (large effort) but small price bars after a substantial rally, with the price failing to make a new high (little or no result), it may suggest that smart money is unloading shares in anticipation of a change in trend.

This is a five-step approach to stock selection and trade entry distilled from Wyckoff’s trading methods. The five steps can be summarized as follows:

The Wyckoff trading strategy has been around for over a century, and traders still find it useful.

Last Updated on July 14, 2022 by Quantified Trading Traders often look for ways to measure the price momentum. The rate of change is one of the most commonly used indicators for that. Let’s take a look at the indicator. Often referred to as the momentum indicator, the rate of change (ROC) is a momentum-based…

Last Updated on July 30, 2022 by Oddmund Groette Cup and handle Pattern (technical analysis and trading)   Chart pattern recognition is one of the most popular techniques employed by chartists and technical traders; they constantly study and analyze price movements in hopes of detecting patterns that show the next most probable price movement. While…

Last Updated on July 30, 2022 by Oddmund Groette Stock indexes are widely used as benchmarks for tracking a basket of stocks within a particular sector or segment of the market. Investors use the indexes to assess the overall health of the sector and compare the performance of their own holdings The S&P 400 index…

Last Updated on July 30, 2022 by Oddmund Groette Identifying core strengths, weaknesses, opportunities, and threats leads to fact-based analysis, fresh perspectives, and new ideas, which are the benefits of a SWOT analysis. SWOT analysis is a technique for assessing the performance, competition, risk, and potential of a business, a product line, an industry, or…

Last Updated on July 30, 2022 by Oddmund Groette Almost every country has a functional stock market, but not all countries’ stock markets have been performing the same. If your great-great-grandfather had invested $1 in the U.S. stock market in 1900, it would be worth $3,806 at the end of 2019, as the U.S. market…